Screen: ‘In for treatment,’ About Dutch Hospitals

The beginning of “In for Treat­ment” almost has the ring of black comedy, as a man em­barks on a series of medical tests at a hospital where be is babied, denied information and eventually refused permission to leave. Although Mr. de Waal (Helmert Woudenberg) seems perfectly healthy when he enters the hospital, the nurses are soon an­noyed to find him walking instead of using a wheelchair. The aides who ad­minister tests that de Waal doesn’t visibly need assure him, “Don’t worry, it’s all done by computer.”
This Dutch film, an entry in the New Directors/New Films series co-sponsored by the Museum of Modem Art and the Film Society of Lincoln Center, subsequently proves to be serious -deadly serious- about its subject. The suspicion that de Waal has in fact been weakened by overzealous testing soon gives way to the news that he is gravely ilI. The rest of the film, which unfolds in a grim and realistic manner, watches de Waal painfully acclimate himself to the prospect of death. The de story also has its affirmative side, as de Waal and his roommate, a young cancer patient, help bolster each other’s spirits. Together, they combat the demoralizing effects of the hospital’s bureaucracy.
“In for Treatment” is a collaborative project of the Netherlands Het Werk­theater, a theatrical troupe that bas written and performed in the film. As might be expected, the result is a somewhat generalized film rather than a sharply focused one. De Waal, as played by Mr. Woudenberg, is a plain, unassuming figure, easily eclipsed by doctors, nurses, fellow patients and other supporting characters. Even the drama of de Waal’s rift with his wife (Marja Kok) becomes subordinate to the Iarger portrait of subdued, mad­deningly impersonal hospital life.
Overshadowing the potential drabness of “In for Treatment” are the con­viction of the performances and the virtually clinical approach the film takes toward its subject. There is not an aspect of de Waal’s hospital experience that goes unexamined, just as there is not a part of the patient himself that is not eventually poked or prodded.
Mr. Woudenberg’s performance, carrying de Waal from sheepish pas­sivity toward rage, grief and rebellion. is accessible and sympathetic. More important, the actor makes de Waal so directly responsive to the way he is being treated that the film develops a very valuable coherence. The Het Werktheater ensemble works with unobtrusive skill to give the film a pal­pable, cumulative sadness and a slight but significant cathartic lift.
”In for Treatment” will be shown tomorrow at 8:30 P.M.” 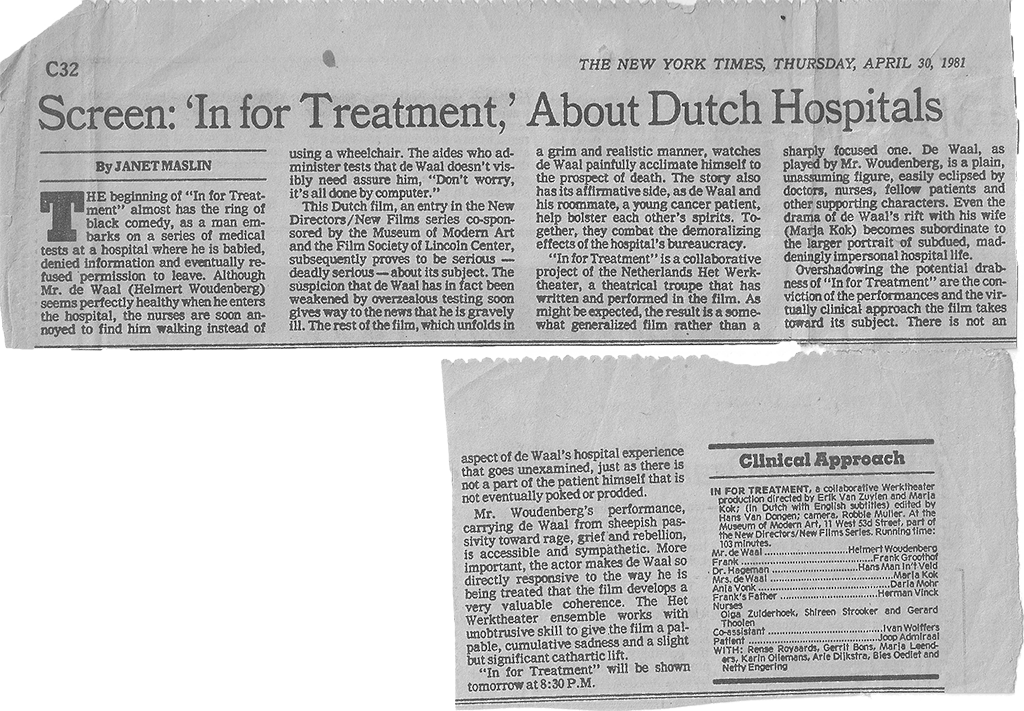